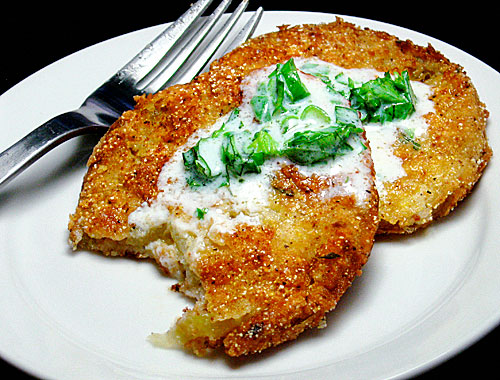 Now, I’m a connoisseur. I’ve eaten them fancy (with lump crab and goat cheese); I’ve eaten them plain. And I’ve gotten Jeff hooked on the ones at our favorite meat-and-three. A place where the weekly menu looks older than the Ten Commandments, and regulars commit it to heart just as reverently, for thou shalt have fried chicken on Monday but thou art outta luck any other day. Luckily, the fried green tomatoes are a daily blessing. Served three at a time on their own dish to keep them crisp. Made with a dredge so coarse you can see the needles of rosemary sticking out, like the tomato’s literally about to explode with flavor.

I love them. But I’d never made them until last night.

A few days ago, I was flipping through “The Lee Bros. Southern Cookbook”

And then I went to the grocery, and there was a bin of green tomatoes. On sale! Someone tell Oprah that “The Secret” – it TOTALLY works!

My skillet wasn’t the right size for any serious deep-frying, so I whipped out my nuclear option: a cast-iron round French oven. It’s deep and heavy, practically splatter-proof. While the oil heated, I sliced and dredged the tomatoes – a much simpler task than expected, since they’re so firm. Then I lowered them into the oil.  Making fried green tomatoes at home is dangerously easy.

As for the Buttermilk-Lime Dressing, Jeff’s not a buttermilk fan, so he wouldn’t touch it with Bea Arthur’s tongue, but that left me free to dip my finger in at will. Seriously, this dressing should be served in shot glasses. Shot glasses made of FRIED GREEN TOMATOES.

Anyway, the Fried Green Tomatoes with Buttermilk-Lime Dressing will be my last summer salad. (“Salad” as in “green and topped with dressing.”) I am officially declaring summer over. Not because it’s chilly (it isn’t), not because the leaves have changed color (they’re haven’t), but because of the most indisputable sign that Autumn is here: the return of Starbucks’ Pumpkin Spice Latte.

Now, if I can just figure out how to fry chai …

Adapted from From Matt Lee and Ted Lee’s “The Lee Bros. Southern Cookbook”

1. Cut out the stem ends from the tomatoes, and slice the, 1/4-inch-thick with a serrated knife; reserve. Whisk the eggs and milk together in a broad, shallow bowl.

2. Pour the oil into a 12-inch skillet, and heat over medium-high heat until the temperature on a candy thermometer reads 365 degrees. (If using a different size skillet or pan, fill with oil to a depth of 1/3 inch.)

4. Spread the dredge on a large plate or pie pan or in a small, shallow baking pan. Taste the tomatoes. They should have a bright tartness like citrus fruit. If they don’t, sprinkle the slices with salt and lemon juice. Then press 1 tomato slice into the dredge, once on each side, shaking any excess loose. Dunk in the egg mixture, then dredge the slice on both sides again. Shake off any excess ad place the slice on a clean plate. Repeat with more slices until you’ve dredged enough for a batch (3 or 4 slices). With a spatula, transfer the first batch of slices to the oil.

5. As the first batch cooks, dredge the second batch of tomatoes, but keep a watchful eye on the first. Once the slices have fried to a rich golden brown on one side, about 2 minutes, flip them carefully and fry for 2 minutes more, or until golden brown. Transfer the fried tomatoes to a plate lined with a double thickness of paper towels and leave them to drain for 1 minute.

6. Transfer the slices to the baker’s rack in the oven, arranging them in a single layer, so they remain warm and crisp. Repeat with the remaining slices until all the green tomatoes have been fried. Serve right away with Buttermilk-Lime Dressing (see below).

In a medium bowl, sift the flour, cornmeal, salt, and pepper together twice. Stir and turn out onto a flat surface. Press tomatoes into the mixture on all sides and shake the excess loose.

In a small bowl, whisk the ingredients together until thoroughly combined. Cover tightly and store in the refrigerator not more than 2 days. 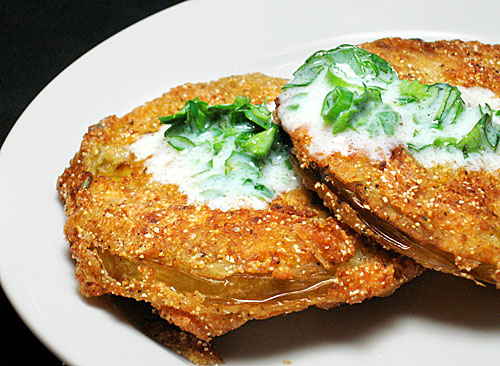