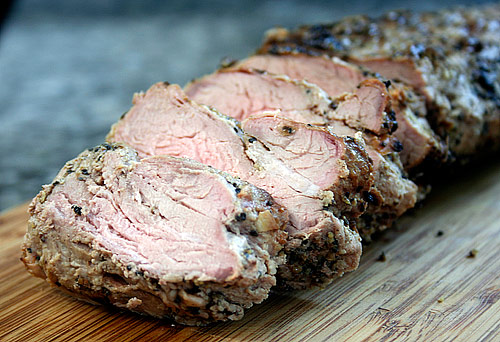 A few weeks ago, a preview for TLC’s “18 Kids and Counting” came on, and my nephew said, “That means they’ve had The Sex 18 TIMES!”

Not the most comfortable moment for my very-pregnant sister, but you’ve got to admit, the kid has an impressive mastery of cause-and-effect.

When Jeff and I decided to try this Grilled Caribbean Pork Tenderloin, I wasn’t exactly sure what we’d get, mainly because of the marinade. The tenderloin was supposed to soak for six hours in an opaque bath of coconut milk, Vidalia onion slices, fresh ginger, garlic, Scotch bonnets, dark brown sugar, lime juice and dark rum. And when you bring such disparate forces together, things either go right or wrong.

There is no middle ground.

Once Jeff finished grilling the tenderloin, I ran the meat upstairs to rest while I finished up in the kitchen. Usually my powers of putting resting meat out of my mind are strong, but not this time. I was a clock-watcher. I hovered. And when Jeff handed me a little bite while he was slicing the meat, I was not disappointed.

The “tropical” flavors aren’t over the top, but they’re definitely there, and the marinade makes for one tender tenderloin. Actually two, if you follow the recipe. The next night, we came in late from a party, sliced the second tenderloin into medallions, and ate it with our fingers straight off the plate.

Adapted from Emeril Lagasse’s “Emeril at the Grill”