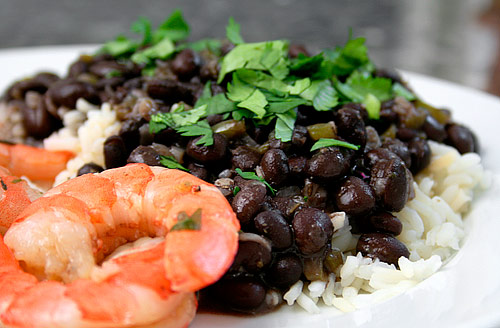 I’m pretty ruthless about culling old magazines, but there are a few I just can’t part with.

And the completely classic September 1998 issue of Martha Stewart Living. The one with the citron yellow Victorian chest of drawers on the cover. And the feature on Denyse Schmidt’s awesomely contemporary quilts. And instructions on how to play backgammon and make better spaghetti and completely clean the refrigerator and oven-dry vegetables and give haircuts.

It’s also the issue that featured a full menu of Cuban food, from mojitos to turkey picadillo to coconut-rum flan.

I’ve been making these Cuban Black Beans since that issue came out.

The beans seem slow-cooked, even though they only take about 30 minutes, thanks to the recipe’s layers of flavor – which start with a base of simmered onions, garlic and bell peppers. When the onions are soft and translucent, you add the black beans and black-bean puree and a handful of spices that don’t seem to make sense at first, but they do.

And then, when the beans are starting to seem a little heavy, you stir in a tablespoon of vinegar, and it instantly brightens the flavor.

The final touch is a few tablespoons of cilantro, but I like to add them on the plate instead of in the pot to avoid that certain Palmolive flavor.

This is an easy recipe to reduce, but if you do have leftovers, they make a great black bean soup. Just add a few cups of chicken broth (depending on the quantity of beans you have left), bring it to a boil, and simmer for about 10 minutes. For extra flavor, you could cook a few slices of bacon in the pot before you add the beans, and garnish with a squeeze of lime juice, a little cheese and a spoonful of sour cream. When we have leftover rice, I like to add it to the soup or just spoon it into the bottom of my bowl and ladle the soup on top.

I’ve been known to eat these beans as a main course, but they make a fitting side to almost any meat, especially fish and grilled chicken. They are – dare I say it? – a good thing.