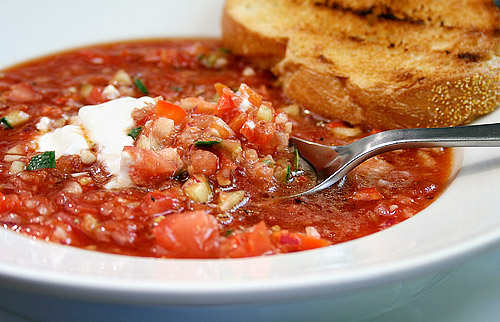 I was going to write about trying gazpacho for the first time.

In summer 1984, there wasn’t a more coveted, longed-for object than a ticket to the Jacksons’ Victory Tour. That was when the “M” in MTV seemed to stand for Michael. Kids were trying to teach themselves how to moonwalk. Everyone could sing along to every song on “Thriller.” The height of Michael Jackson Mania.

The closest tour stop was Knoxville, but he might as well have been performing on the Great Wall of China. I wasn’t going. There was absolutely no hope. And then a Nashville radio station announced a ticket contest: you could send them a postcard, and if they drew your name, you had 10 minutes to phone the station to claim your tickets. I mailed one postcard. In secret. And every night I turned down my radio (so my parents wouldn’t know how late I was staying up) and listened for my name to be called.

I heard my name –my name! my name! – and it was like winning the lottery and finding one of Willy Wonka’s Golden Tickets and breaking a world’s record all in one glorious moment. I jumped out of bed and ran to the nearest phone – the one in my parents’ bedroom – and yammered an explanation to them as I dialed the radio station’s number, desperate to get through to the DJ before my 10 minutes were up, but my voice just came out as a squeal. I sounded like a manic preteen dolphin.

Going to that concert was the thrill of a 10-year-old’s lifetime. That’s what I want to remember about Michael Jackson.

What about you? Are Michael and Farrah on your mind tonight? Did you have (or aspire to have) “Farrah hair”? Did you stay up late trying to catch “Thriller” on “Friday Night Videos”?