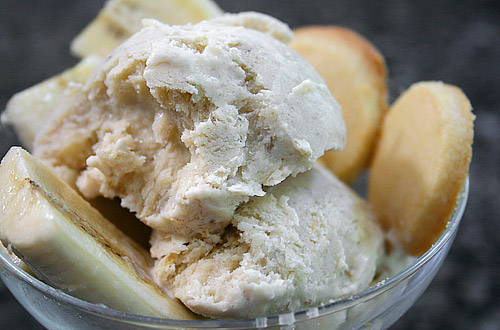 So, I’m getting ready to post this Banana Pudding Ice Cream when I check my Google Reader, and – what the huh? – Joy the Baker has posted a one-year rewind of her Banana Pudding Ice Cream. Her recipe channels that old-school flavor, with bananas, banana instant pudding, vanilla wafers and Cool Whip. This Lee Bros. recipe is a little more like a Bananas Foster ice cream with vanilla wafers added at the last minute. There’s definitely room for both.

The Lee Bros.’ Banana Pudding Ice Cream starts like a classic New Orleans Bananas Foster, with a warm skillet full of butter, brown sugar, bananas and dark rum, but rather than ignite the rum, you let it burn off slowly over the course of a minute or two. Then you cool and puree the banana mixture before combining it with custard and cream. The result is a smooth, creamy ice cream with a complex banana flavor, one that’s richer and mellower than the banana pudding you remember. In fact, you could argue that it’s actually Bananas Foster Ice Cream before you fold in the vanilla wafers. That’s not a bad thing.

Makes about 1 quart; enough for 6 people