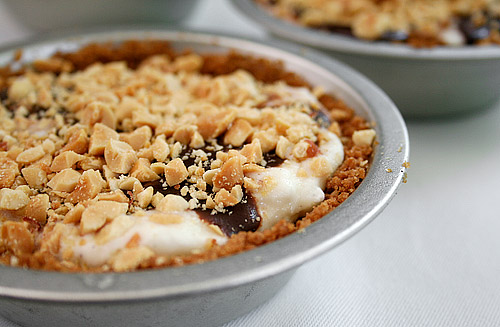 Mary of alpineberry and I conjured up this month’s You Want Pies With That? challenge: a pie that tastes like summer. I’m sure we’ll be seeing plenty of envy-inducing peach, berry and key lime pies, but for me, it isn’t summer without a Nutty Buddy®.

During the school year, Mama would make us settle for fat-free Fudgesicles.

Which I would smear with peanut butter.

But when summer finally came around, Daddy would pick up a box of Nutty Buddys and show us how to remove the cone and snap the empty bag into shape, so we could shake the remaining crumbs into our mouths without making an unholy mess. Then, once we’d finished our cones with half the chocolate on our faces, he’d pass the paper towels and tell us we looked like we’d been “sucking a sow.”

Feel free to use that with your own children.

These Nutty Buddy® Mini-Pies mimic the original sundae cone – with a sugar-cone crust brushed with melted chocolate, a few scoops of Purity Premium All-Natural Vanilla Bean ice cream and a final sprinkling of chopped nuts – but there’s a major difference in the chocolate coating. Instead of a syrup, I made the Hot Fudge Sauce in Scharffenberger and Steinberg’s “Essence of Chocolate”

and chilled it before drizzling it over the ice cream. The richness of the sauce helps to cut the sweetness of the sugar-cone crust, and it gives the pies a slightly more sophisticated flavor than the cones. So, these pies not only make a great dessert, they could come in handy if you needed to gently encourage someone to do your bidding.

You can’t get that kind of power from a popsicle.

Adapted from John Scharffenberger and Robert Steinberg’s “Essence of Chocolate” 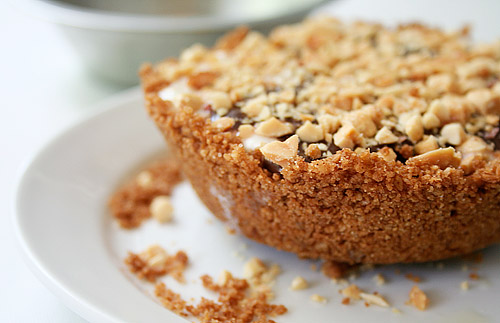