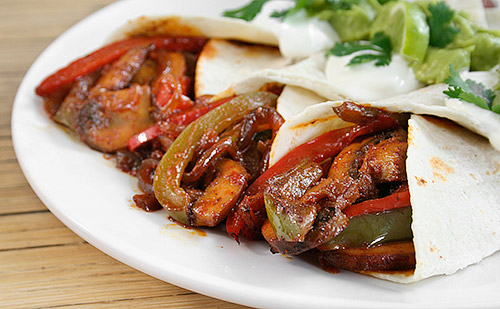 Are you doing a “Meatless Monday” yet?

The Meatless Monday campaign asks everyone to forego meat one day a week to improve their health and make a positive impact on the environment. It’s a simple idea that’s gaining momentum. There are major campaigns, including Meatless Monday and the McCartneys’  Meat Free Monday. If you’ve seen “Food, Inc.,” you’ve heard that Meatless Monday is one of the top 10 ways to improve our food system. If you caught the “Oprah” episode on eating green, you saw Michael Pollan (“In Defense of Food”

It’s hard to disagree with the idea of starting the workweek on a healthy note, so instead of posting my favorite vegetarian recipes willy-nilly, I’ll be sharing them every week on Meatless Monday, starting with these Vegetable Fajitas.

The filling is a combination of onion, peppers, mushrooms and garlic, marinated in oil and chili powder and then stir-fried. The chili powder brings a fair amount of heat, so I like to pair the fajitas with guacamole and sour cream. And fresh cilantro. And lime juice.

All the smoke, sizzle and spice, minus the meat. Because meatless doesn’t have to be boring.