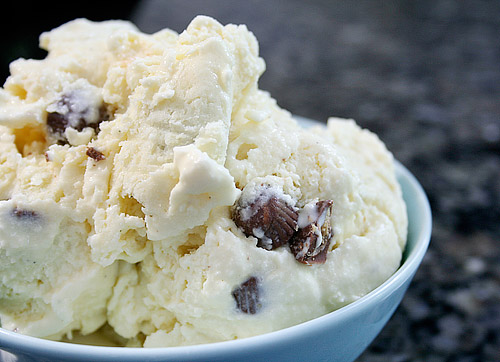 In honor of this week’s Tuesdays with Dorie recipe, Vanilla Ice Cream, Jeff and I decided to stop deliberating and actually BUY AN ICE CREAM MAKER!

I’d been making ice cream without a machine for months using David Lebovitz’s old-school method, and I was happy with the results, but they took several hours.

So, we grabbed one of this particular home store’s ever-present coupons with visions of sugar cones dancing in our heads.

We walked up to the display of ice cream makers, and there it was: The One. The same one we’d lusted over last year. And it was $10 MORE.

In the words of Our Lady Oprah, what I know for sure is that the Lebovitz method works.

I followed Dorie’s recipe to the point where it required a machine, and then I chilled it in a bowl over an ice bath and slipped it into the freezer. After that, it was all my meaty biceps, a big wooden spoon and time.

The chocolate pieces are Trader Joe’s mini peanut butter cups I stirred in at the last minute – before I could give in to the temptation of lining them up on the counter and snorting them.

So, instead of instant gratification with the $50+ machine, we spent the afternoon at home, slowly tending our ice cream and wrapping up “Torchwood: Children of Earth.”

It was a fair trade.