Warning: file_exists(): open_basedir restriction in effect. File(core/post-comments) is not within the allowed path(s): (/nfs:/tmp:/usr/local:/etc/apache2/gs-bin) in /nfs/c10/h14/mnt/148131/domains/ezrapoundcake.com/html/wp-includes/blocks.php on line 532
 Summer Spaghetti with Arugula and Tomatoes
Skip to content 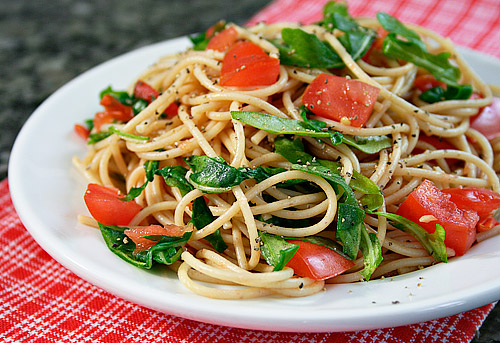 Wouldn’t it be nice if they tasted like funnel cake or pepperoni or piping hot doughnuts (PHDs)? I would never forsake a sack of doughnuts.

All eating your greens offers is a feeling of moral superiority and … nutrition. Folic acid. Lutein. Vitamin C. Calcium. Protein.

Greens are filled with the magic of baby unicorn hiccups.

Anyway, I’ve finally found a recipe I like that has a Significant Amount of Greens: Summer Spaghetti with Arugula and Tomatoes. I made it for lunch Wednesday. And then I made it again Thursday. And Friday. And I kept on until we ran out of arugula, which NEVER HAPPENS.

I fully expect the Ripley’s Believe It Or Not!™ experts to arrive any day now and swab the crisper.

The recipe calls for stemming and slicing the arugula, but if that feels fussy, just throw a few handfuls straight from the bag into a pasta dish. Then add the heated tomatoes and spaghetti, and toss everything until the arugula wilts.

The bulk provided by the arugula will help you feel full if you’re limiting yourself to an Actual Serving of Pasta.

Plus, the bitter, peppery flavor of the greens is pretty aggressive, so you wind up with a healthy pasta dish that doesn’t require cheese.

It doesn’t taste like funnel cake, but it won’t give you a third buttock, either.

18 thoughts on “Meatless Monday: Summer Spaghetti with Arugula and Tomatoes”