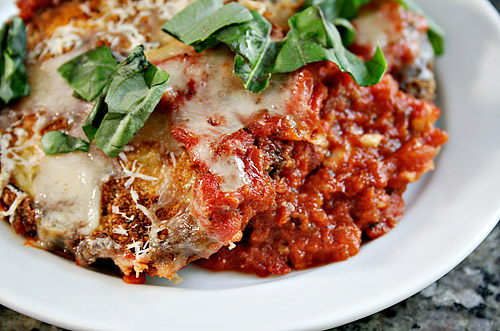 A few years ago, I was standing in line at the post office behind this guy who was checking out the stamps in the display case. When the postal worker asked him what kind of stamps he wanted, without hesitation, he said, “The ones with Dr. Phil.” And just as I’m thinking, Maybe I can get a set with Oprah’s Best Friend Gayle, I see that the guy’s stamps actually bear the likeness of someone who’d been slightly less powerful than Dr. Phil: President Gerald R. Ford.

In the world of Eggplant Parmesan, fried eggplant is the Dr. Phil. A wholesome veg corrupted by heat and grease until it stops offering life strategies and starts interviewing mothers of grotesquely obese toddlers. Baked Eggplant Parmesan has the same flavors and crunch, without the added fat.

The key is vigilance against sogginess.

First, you wait until the salted eggplant slices release two tablespoons of liquid. Then you press the slices with paper towels. And when you’re ready to layer your spicy tomato sauce, eggplant slices and cheese, you dot the eggplant with sauce (instead of evenly spreading it) so the exposed eggplant stays crisp. So, you get the flavor and texture without all of the extra oil and the ridiculous-but-persistent fear that one day you’ll have to be removed from your house with a crane.