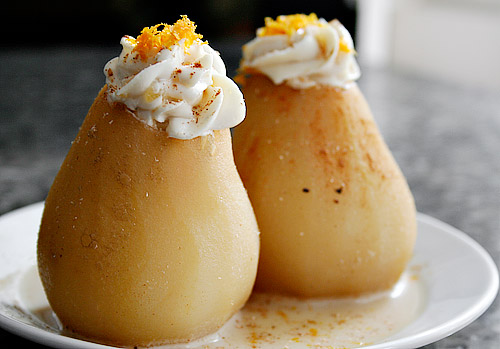 We have a few weeks left until the official start of autumn, but aren’t you getting the itch?

The itch for chai tea, pot roast, apple fritters and country ham. Crisps and chilis and creamy macaroni and cheese. Anything slow-cooked. And the shout-hallelujah return of Starbucks® Pumpkin Spice Latte.

Here in Nashville, it’s still too hot for heavy comfort foods, so this is my compromise: Chai Poached Pears Filled with Ginger Cream Cheese.

You place the ingredients in a small bowl and mix them with a fork or spoon. Then, spoon the filling into a bag for piping (a sandwich bag with one corner snipped off will work), or slice the pears in half and add a mound of filling. It’s the sort of crave-worthy stuff that would be good eaten straight out of the bowl or spread on a gingersnap, much less piped into a poached pear.

You could stop there and have a fantastic dessert.

But, just to push it to that level of Total Pear Nirvana, there’s a sauce. A warm sauce made of the chai poaching liquid, orange zest, cream and honey. Add a dusting of cinnamon and nutmeg, and you have a light but comforting dessert that will help you get that fall fix, minus the lard and red-eye gravy.