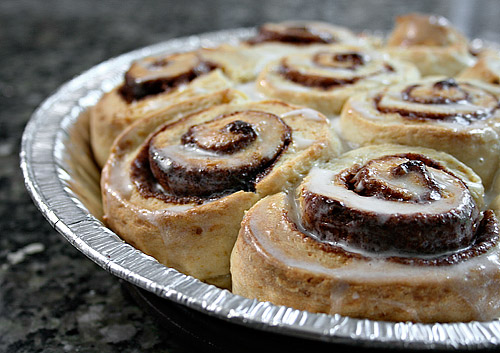 So, when I married Jeff, I vowed to make his favorite cinnamon rolls on a semi-regular basis.

There are times when, strangely enough, he doesn’t want to wait several hours for the dough to rise … and the rolls to rise … and the baking. Like when we’re having a lazy Sunday breakfast or a late-night craving strikes during a marathon of “The Wire.”

That’s when I break out The Great Compromise: these Quick Cinnamon Biscuits.

There’s no bringing ingredients to room temperature or even melting a little butter. You mix the dough by hand in one bowl, pat it into a rectangle, and roll the filling inside. Then slice the dough into rounds, place them in a baking dish, and bake them.

Since the biscuits are packed in tight, they stay soft and gooey inside, just like a cinnamon roll.

62 thoughts on “Cinnamon Biscuits. No Yeast, No Waiting, No Problem.”