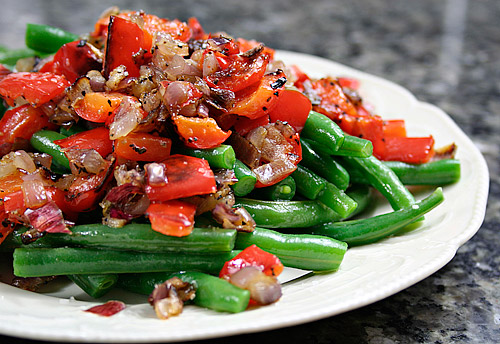 So, this is the Barefoot Bloggers’ “Week of the Contessa,” and while I’m not making all five recipes (because I enjoy walking through doorways without turning to the side), I couldn’t resist Ina Garten’s Roasted Potato Leek Soup or these French String Beans with Roasted Red Onion and Peppers.

There’s no telling how many times I’ve reached for a can of these, just to get something green(ish) on the dinner plate, so I was eager to see how different the fresh beans, onions and peppers would be. The process of blanching the beans, roasting the onion and peppers and combining everything together takes just under 30 minutes, but LOOK AT THEM. The beans stay bright green and sweet, and they’re not cooked to mush. Roasting the vegetables intensifies their flavor, but they keep their shape and color.