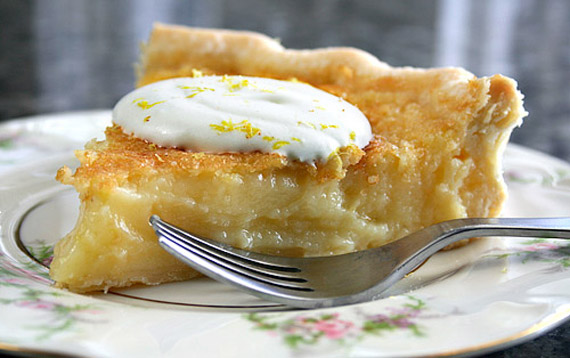 Ever wondered how chess pie got its name?

Some think it was originally  called “Chest Pie,” after the pie chest where it would have been stored. Others believe that when the woman who created the recipe was asked what it was, she said, “It’s jess’ pie,” which later morphed into “chess.”

As many times as I’ve asked Mommaw about a recipe and she’s replied, “They’re just meatballs,” “They’re just bourbon balls” or “It’s just coconut cake,” I tend to believe the second story. If Mommaw had composed the “Hallelujah Chorus,” she’d say, “It’s just something to whistle.”

Chess pie comes from simple ingredients that a Southern farm wife of the 30s and 40s would have had at her fingertips: eggs, sugar, cornmeal, flour, salt, butter and buttermilk. Things that wouldn’t have been thought of as anything special. But put them together, and you get a pie that inspires devotion, because it just doesn’t taste like anything else.

You really can’t have a church potluck without at least one chess pie.

This Lemon Chess Pie, created by Edna Lewis and Scott Peacock, balances the sweetness of a typical chess with a fair amount of fresh lemon juice (a third of a cup) and lemon zest to give it some bite. Like the original, the lemon chess filling crusts a little in the oven and turns a lovely golden-brown, but it’s much smoother than its cousin. Creamy. Almost like pudding.

You’ll notice this recipe doesn’t require any heavy equipment. Just be sure to let all of the filling ingredients come to room temperature,  whisk them together one at a time, and bask in the greatness that can come from simple things.

All ingredients for the pie must be at room temperature for thorough blending. Any cold ingredients, especially the buttermilk or lemon juice, will cause the butter to resolidify and separate from the mixture.

Makes enough for one 9-inch pie