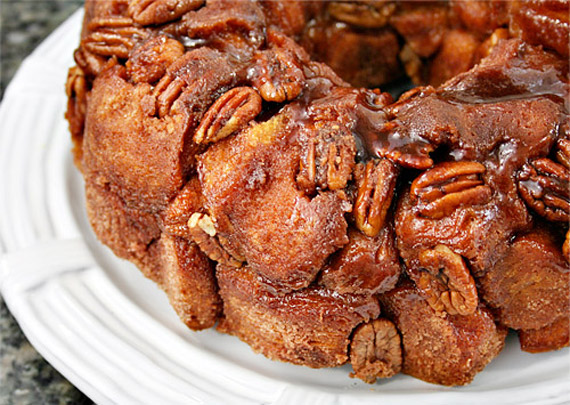 I knew she was holding out on me.

Mom makes the best Monkey Bread, but she only does it once a year, when they release a new “Twilight” movie.

She’s made us monkey bread and hot chocolate (with marshmallows!) for breakfast every Thanksgiving morning since my bedroom was plastered with posters of The Muppets, Bo Duke and B.J. and The Bear. Biscuits quartered, dipped in butter, rolled in cinnamon sugar and baked in a bundt pan, forming a wreath of sweet and sticky goodness worth waiting a year for.

My sister and I would snack on our monkey bread in front of the TV while we watched the Macy’s Thanksgiving Day Parade and Daddy read aloud from the Sears sale insert in the newspaper.

Not much has changed, except that now I bring Jeff for breakfast, and Mommaw’s in the mix. There’s nothing like spitting hot chocolate across the room after you hear your 89-year-old grandmother ask, “Who the hell is Dora, and why does she think I care?’

Anyway, I’ve been trying to wrangle Mom’s monkey bread recipe for weeks, and she’s been holding out on me. Being vague and evasive about amounts and technique. I took what little she told me and looked up a few recipes on the Internet to find exact amounts.

The result was Not Mama’s.

So, I called her back tonight and told her what I’d done and how so very bad it was, and she finally took pity on me and taught me The Way of the Monkey Bread.

I think you’ll see why we only have it once a year and love every bite.