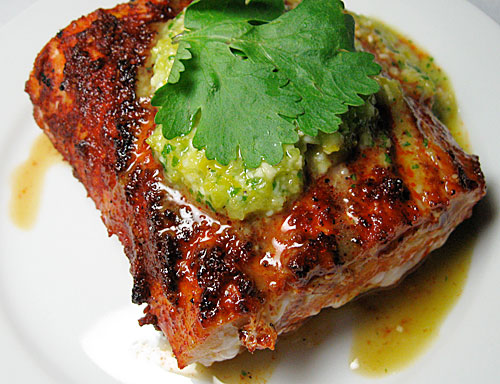 We’re supposed to be stewing and braising and roasting everything now. But Mother Nature is having a hot flash, and it’s 81 degrees F. In mid-October. So, we’ll save the apples and pumpkins and gingerbread for another day. A day when it’s chilly enough to wear something with sleeves. In the meantime, we’re taking advantage of this perfect grilling weather.

Jeff had to work late on his birthday, so we postponed his birthday dinner, which became more elaborate with each passing day. Not just baked potatoes but Loaded Baked Potatoes. Not just steak but a nice, prime cut. No, Surf and Turf! And not just any “Surf,” but Barbecued Mahi-mahi with Yellow Pepper-Cilantro Pesto.

It was time to MAKE this meal before it got any more Caligulicious.

We weren’t seafood people until we honeymooned in Hawaii and tried the amazing fish: buttery waloo, fish and chips made with ono, fresh ahi. I didn’t think we’d be able to find this fish locally until we made a trip to the butcher for Jeff’s birthday steaks and noticed the fully stocked seafood case in the corner. There were the usual suspects – salmon, scallops, catfish, tilapia – and … mahi-mahi?

Both of us love big flavors, so we settled on this recipe for Barbecued Mahi-mahi with Yellow Pepper-Cilantro Pesto. The smokey rub – which includes Spanish paprika, ancho chile powder, cumin and chile de arbol powder – and the bright pesto make for a lightning-quick, delicious entrée that takes less than 10 minutes on the grill.

So, yes, Jeff got his Surf and Turf. But I stopped short of the parade and the dancing girls. He’s got to have something to look forward to next year.

From Bobby Flay on “BBQ with Bobby Flay” (Food Network) 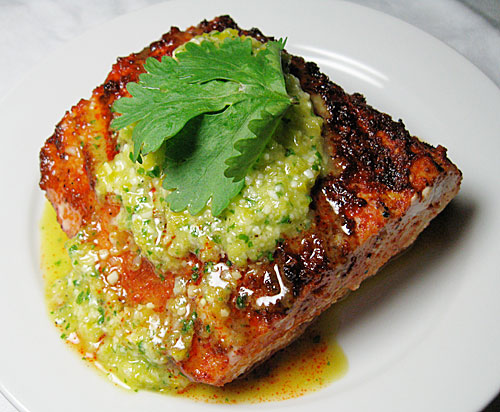