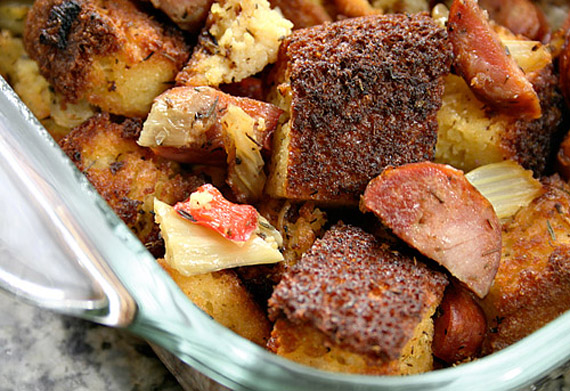 Did you hear that little “whoosh”?

Don’t be alarmed. It was just the sound of my mom’s nose turning up at the sight of this dressing.

And I am not offended. I get it. Sitting down for a holiday meal is not unlike going to a pricey big-ticket concert. You want the greatest hits, not a playlist full of debut casseroles and an experimental turkey.

A little invention is fine, but if I don’t hear my favorite song, I want my money back. And by “favorite song,” I really mean “marshmallow-covered sweet potatoes.”

But sometimes a new recipe looks too good not to try. That was the case with the Cornbread Stuffing with Andouille, Fennel and Bell Peppers from this month’s “Bon Appétit.” Cornbread tossed with chunks of andouille sausage, cubes of sweet fennel, pieces of onion and red bell pepper and a few tablespoons of fresh thyme. The mixture stays dry and crunchy on top, moist and sweet and smoky underneath. It’s a tough dish to stop picking at.

This Thanksgiving, we’ll be loading our plates with Mom’s traditional turkey and dressing, but this andouille stuffing won’t be forgotten. Jeff and I are already tinkering with the recipe to turn it into a main course.

Something with the potential to be a greatest hit.