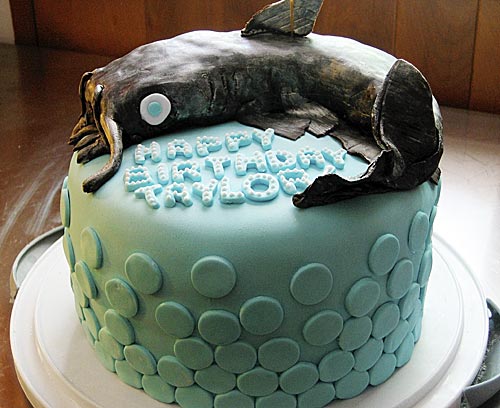 Last year, I was at a total loss for what to give Jeff for his birthday. My brother-in-law, Taylor, had just scored a new-in-the-box PlayStation 3 from a police auction, and he gave it to me to give to Jeff. G-a-v-e. I paid him back the money he’d spent, but he never asked for it.

How much did Jeff like the gift? When I gave him the PlayStation, we were dating. Now, we’re married.

So, when my sister asked me to make a birthday cake for Taylor–a neapolitan cake topped with a huge catfish–I was all about it. Never mind that I’d never actually seen a catfish. Not without hushpuppies and tartar sauce.

While I baked the cakes and made buttercream, Jeff molded the catfish out of Rice Krispies treats. We let the “body” dry overnight, and then I wrapped it in chocolate fondant and sculpted the whiskers, gills, and fins the next day.

I held the cake on my lap while Jeff drove to Jenn and Taylor’s house. Rush hour traffic. Forty-five minutes. On the interstate.

I’ve never been so relieved to have something out of my car.

But the looks on their faces were worth it. Taylor was surprised. Jenn was beaming. My nephew, Logan, wanted the fish head, and his younger brother, Jackson, was pulling off the fondant and eating it by itself.

So, neapolitan? Check. Catfish? Check. A 200 proof sugar rush for the 3-year-old? Check.

My work there was done. 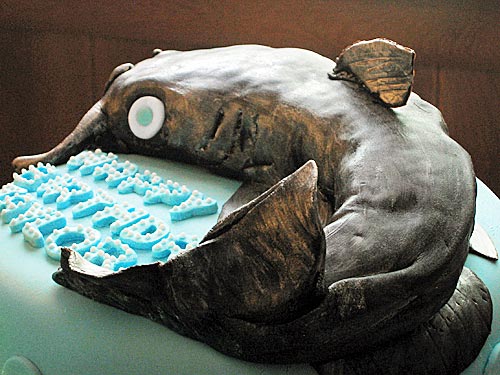