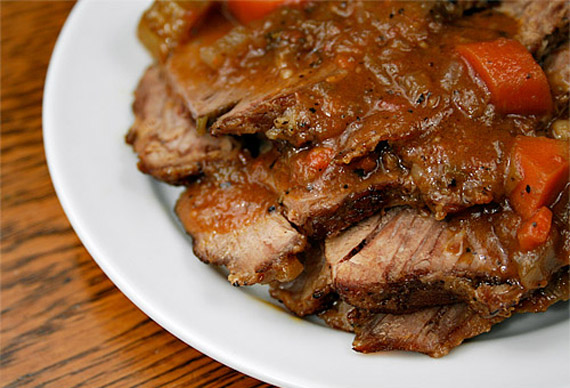 I KNOW! I love a fall-apart pot roast, too. And I’m sure this would be one, if you seared it and then cooked it in the crockpot on low for 10 hours. But this is Ina Garten’s Company Pot Roast, and I don’t think you’re allowed to have a crockpot in The Hamptons. Bless her heart.

No, Ina’s pot roast is made for eating with a knife and fork, a linen napkin and a glass of red wine. It’s luxe. More boeuf bourguignon than Betty Crocker. And there’s just something about being able to mahandle a five-pound roast and transform it into something that looks like it came straight from a Norman Rockwell painting.

The first order of business is dredging and searing the roast. If you’ve never seared a five-pound hunk of meat, the important thing to remember is that when it’s time to turn it, you need to use a large two-prong kitchen fork (or two  dining forks piercing each side). I’ve tried it with a large spatula and once with tongs, and you wind up scraping or pulling off part of the crust you just seared on. Both are tragic, profanity-inducing craptastrophes, so please don’t send in a spatula to do a fork’s work. The wobbling! I still dream of it.

Once the meat is seared, you start building the sauce by sautéing carrots, onions, celery, leeks and garlic in a large Dutch oven. Then you add red wine and Cognac, which gives it that boeuf bourguignon feel. Finally, you bring the mixture to a boil, add tomatoes, chicken stock, thyme and rosemary.

According to the recipe, you place the beef back into the Dutch oven with the vegetables, cover the pot, and slide it into the oven for about two hours. Maybe longer. However, if you’re a crockpot person, you could sear the meat, place it in the crockpot, make the vegetable sauce, pour it over the beef in the crockpot, and cook it on low for about 10 hours. Just be sure to check the roast in the crockpot with a meat thermometer after about eight hours to keep from overcooking it.

When the meat is ready, you can set it on a cutting board while you finish making the sauce. You can puree half of the liquid and vegetables in a blender or food processor, but I like to use an immersion blender, because you can place it directly into the pot. Then simmer the sauce over low heat, add a little butter and flour to thicken it, and serve it over slices of that gorgeous beef, you glorious example of humanity!

Chuck roast contains quite a bit of fat, which you can trim (if you like) before or after you cook the roast. If you want to remove the fat before you cook the roast, just trim it off of the raw meat, and tie the halves back together with kitchen string before you sear it.

As for the salt, Ina’s recipe calls for repeatedly seasoning the meat and sauce with salt and pepper. She’s talking about kosher salt. If you’re using another type of salt, taste the sauce as you season it to avoid oversalting it.

One of the nice things about this recipe is that it makes an abundance of gravy, so serve the pot roast with something that will soak it up. Mashed potatoes. Egg noodles. Rice. Dinner rolls for prime sopping.

Do they allow sopping in The Hamptons? I sure hope so.

Adapted from Ina Garten’s “Barefoot Contessa Back to Basics”

In this recipe, the type of salt you use matters. If you decide to use anything other than kosher salt, be sure to taste the sauce as you work to prevent salt overload!