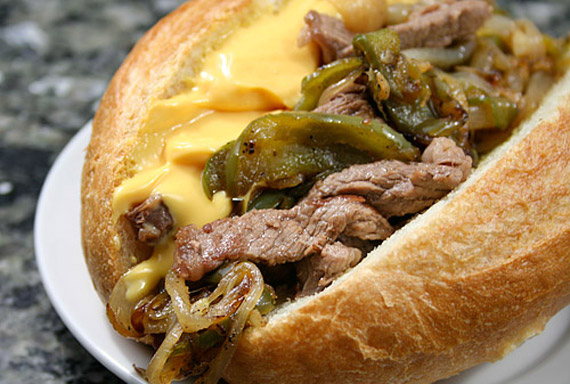 Once you’ve had three Thanksgiving meals in three different cities, you enter a zone where your next meal needs to be the complete and total opposite of turkey and dressing. A light palette cleanser, perhaps? Maybe a crisp, refreshing sorbet?

When you’re serious about hitting the reset button on your palette and your appetite, you’ve really got to go with something like a Philly Cheesesteak. Something packed with beef and onions and peppers and, yes, Cheez Whiz.

DON’T YOU JUDGE ME.

I’m not a huge fan of processed foods, either, but an authentic cheesesteak requires an ample slathering of the orange stuff.

We don’t have a griddle, so Jeff and I double-teamed the sandwiches using two cast-iron skillets. I sauté the onion and green pepper slices in Skillet 1, while Jeff slices and cooks the steak in Skillet 2. The process takes a little more than five minutes. Once the steak is done, I transfer the vegetables to Skillet 2, toss everything together, and pile the mixture into two warm sandwich rolls (split in half vertically, like hot dog buns). Then Jeff dips a spatula in the Cheez Whiz and runs it over the meat and vegetables. And that’s not a euphemism.

After bellying up to untold casseroles and sweets, taking that first bite of gooey, peppery cheesesteak was something to be thankful for, indeed. If only the pilgrims had had Cheez Whiz.