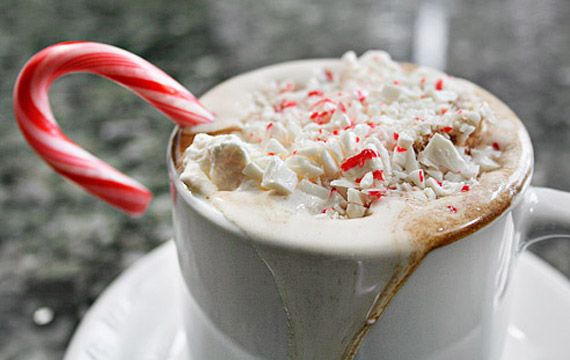 Last week, my sister took my nephew Jack to the store, and he decided to point out everything he wanted for Christmas. Robots. Action figures. Hot Wheels. Deodorant. So, Jenn reminded him that he’d have to write it all down in his letter to Santa. And Jack, who’s 5, was all, “I CAN’T WRITE!” So, he decided to stand in the middle of the toy aisle, like Saul on the road to Damascus, and lift his voice to the man in red, shouting with great conviction: “SANTA, I WANT THIS BIKE FOR CHRISTMAS! SANTA, LOOK! THESE LEGOS ARE COOL!”

Yes, Jenn tried to explain that you couldn’t pray to Santa, but Jack wasn’t having it. However, when she was Jack’s age, she used to flap her arms and try to fly off the hearth, so I think Jack’s doing OK.

Unfortunately, I don’t share Jack’s enthusiasm for Christmas shopping, so I made a pot of Chatham Candy Manor’s Peppermint Hot Chocolate to get me in the mood. I’d read that people on Cape Cod stand in line for it during the Christmas season – and I’m totally in love with all things chocolate and peppermint (like Trader Joe’s Candy Cane Joe-Joe’s, the peppermint meringue cake with chocolate buttercream on the cover of this month’s “Bon Appétit” and the Chocolate Peppermint Sandwich Cookies Joy the Baker posted this morning) – so I had to give the recipe a try.

Then, you make the hot chocolate, flavoring it with peppermint and vanilla extracts.

Then you garnish it with … a candy cane! YES! MORE PEPPERMINT!

I don’t know whether I was on a chocolate-peppermint high or it was just the sugar rush, but after one cup, my heart grew three sizes and I sang along with The Muppets doing the “Twelve Days of Christmas.” By the end of the pot, I just might be talking to Santa.