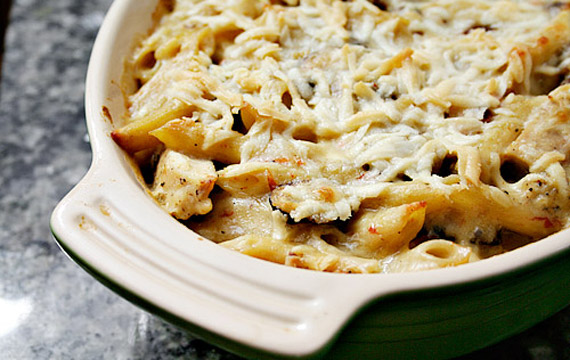 Laura wrote in and asked, “What meal would you take to a new mom?”

I think something like this Baked Penne with Chicken and Sun-Dried Tomatoes might work. You’ve got two family-friendly choices, pasta and chicken, and your friend can keep it in the freezer for up to three months.

Ah, the luxury of knowing you have a homemade dinner waiting anytime you want it.

There are three things you should know about this recipe:

2.) If you’re not sure about the mushrooms and/or sun-dried tomatoes, you can replace them with an extra half chicken breast or other vegetables. Roasted red peppers would be good. Artichokes. Frozen peas or corn. Squash. Zucchini. Broccoli florets. Spinach. Lots of ways to go with this.

3.) The recipe doesn’t contain any seasonings beyond garlic, salt and pepper, so it might be a little bland straight from the oven. If that’s the case, you can jazz up the baked pasta with fresh basil, a dash of Cajun seasoning, or chopped scallions or chives. But an overnight stay in the fridge will work wonders. Your friend’s batch will be as comforting as a big bear hug.

Now, send me that baby!

If you’re freezing the second dish: Prepare through step 4; let cool. Cover tightly with foil, and freeze, up to 3 months. To bake, preheat oven to 400 degrees F, and bake (still covered in foil) on a rimmed baking sheet until center is hot, about 1 1/2 hours. Remove foil; bake until golden, about 15 minutes more.

44 thoughts on “Baked Penne with Chicken and Sun-Dried Tomatoes”