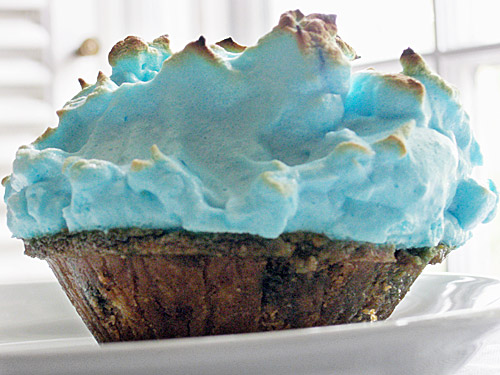 Yep, that meringue is blue.

With most cooking groups, the goal is imitation. But with You Want Pies With That?, the challenge is to create a one-of-a-kind pie representing that month’s theme. Since the idea for the group was inspired by Keri Russell’s pie-making character in “Waitress,” the inaugural theme was “I Love That Movie!” Pick a movie–”Casablanca,” “When Harry Met Sally,” “Purple Rain”–and create a pie inspired it.

I chose “Eternal Sunshine Of The Spotless Mind.”

If you’ve never seen it, imagine being able to undergo a scientific procedure to erase memories of things best forgotten, like the seventh grade. You conjure up every memory you have of that time, and they systematically disappear as you remember them. In the movie, Clementine (Kate Winslet) has an argument with her boyfriend, Joel (Jim Carrey), and decides to erase that man right out of her head. He decides to do the same thing, but during the procedure, he starts remembering the good times and changes his mind. Will he be able to save any memories of her? Or is Clementine “lost and gone forever”? And what is she doing with that hobbit?

In honor of Clementine, I give you Eternal Sunshine of the Spotless Pie. A graham cracker-mac nut crust, because she was a little nutty. A tangerine filling, for her nickname, “Tangerine.” And a lovely sky blue meringue.

Don’t miss out on the fun! Join You Want Pies With That? by e-mailing [email protected]

36 thoughts on “Eternal Sunshine of the Spotless Pie”