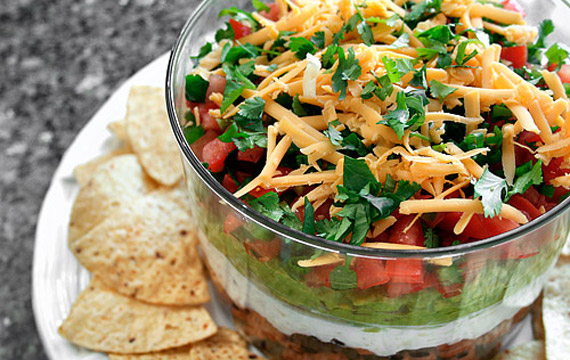 When it comes to dips, I’m an equal opportunity glutton. Warm spinach and artichoke? Yes. Ro-Tel® Queso? Can’t pass it up. French onion? Give us some privacy.

But every once in a while, you find a dip that transcends the genre, and for me, that’s Seven Layer Dip. Black beans, sour cream (or Greek yogurt), chunky guacamole, fresh salsa, scallions, cheese and cilantro. It’s like a bean burrito in a bowl. And by that, I mean it’s like Heaven.

I’m in love with this version, because it takes only a few minor tweaks to make it a little fresher and healthier than most. You can go with black beans and/or pintos for the bean layer instead of the usual canned refried beans. Replace the full-fat sour cream with light sour cream or Greek yogurt, and stir the cheese into it to thicken it and disguise the change in flavor. Sneaky, yes?

And you can make your own guacamole instead of buying the packaged stuff. Who needs the preservatives and the stale flavor when you can mash together a perfectly respectable guacamole in short order with just avocado, a squeeze of lime juice and a pinch of kosher salt?

This is a great party dip, so to keep the layers from getting “muddy,” don’t worry about pureeing the beans. You can slightly mash them with a fork or just keep them whole, and then you won’t have to worry about that unsightly brown bean smear making its way through your layers.

However, if you’re making your own private stash, you’re going to love how versatile this dip is. You can:

Ah, the joys of practical recycling. Especially when that recycling involves guacamole.