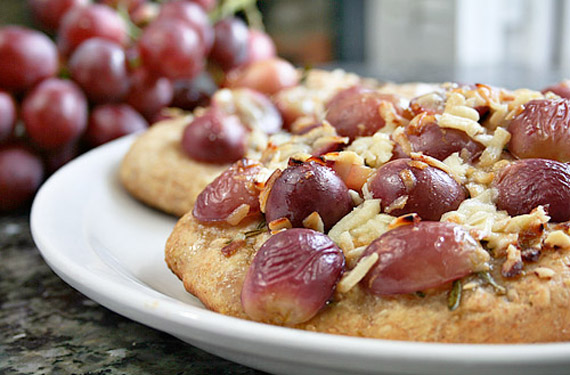 I saw this recipe on Jamie’s website and just kept coming back to it. Mini-pizzas brushed with rosemary and olive oil and topped with blistered (but still juicy) red grapes, a drizzle of honey and some bite, courtesy of a liberal amount of shaved Pecorino. The sort of fruit-and-herb combination you won’t find at Domino’s, no matter what they say about that new formula.

The flavors are complex, but the recipe is simple and ripe for variations. Add a few walnuts or pine nuts for a little crunch. Maybe some shallots to take things more savory. Replace the Pecorino with goat cheese, feta or blue cheese. You could even ditch the honey and trade the grapes for cherry tomatoes. I won’t tell Jamie.

Adapted from Jamie Oliver via JamieOliver.com