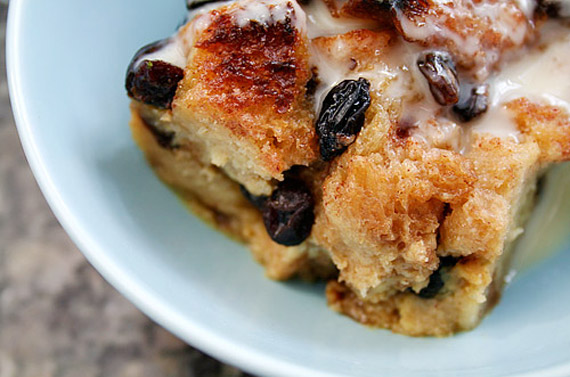 When life hands you lemons, you make lemonade.

But when life hands you a 2-day-old baguette, a freshly opened bottle of Maker’s Mark and five delicious snowbound days, you make Bourbon Bread Pudding. With a warm, buttery bourbon sauce. And bourbon-soaked raisins.

It’s the sort of dessert you want to curl up around and savor while you watch the snow fall. Or read a book. Or watch “The Matrix”

trilogy from start to finish in its entirety.

Traditionally, cooks made bread pudding to use up stale bread, but if you don’t have a geriatric baguette handy, you can tear the bread and toast it in the oven. You want the bread to be dry so that it can fully soak in the custard, a magical concoction made up of common ingredients – egg yolks, brown sugar, heavy cream, whole milk, vanilla, cinnamon, nutmeg, salt and bourbon.

Once the pudding is baked, with a liberal sprinkling of cinnamon and sugar and yes-yes sweet butter on top, it’s like a hug in a bowl. Soft and warm and wonderfully familiar. But add the bourbon sauce, and it’s more like a grope.

So, what are you waiting for? Add the bourbon sauce.