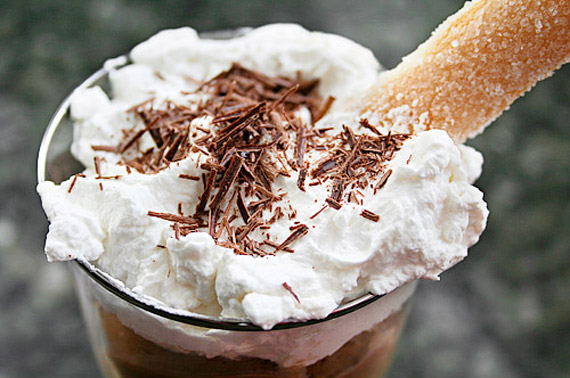 I make a mean tiramisu, but this talent is lost on Jeff, who is a shunner of all things coffee, coffee-related, javafied and mocha-esque.

When Mommaw gave me a kickass Keurig

for Christmas, Jeff looked at it the same way he looks at Henry the Wonderdog. With repulsion followed by begrudging acceptance.

So, since eating an entire tiramisu might lead to firefighters sawing the house open to carry me out (next on TLC’s “Half-Ton Blogga!”), I get my fix with this Tiramisu Sundae.

A typical tiramisu has layers of ladyfingers (soaked in espresso) alternating with layers of mascarpone cream. There also can be alcohol and whipped cream involved (just like the night you were conceived! I know!) and chocolate shavings or a dusting of cocoa. For this sundae, you’ll replace the mascarpone layers with scoops of ice cream – vanilla, chocolate, coffee, Ben and Jerry’s Coffee Heath Bar Crunch, Starbucks Java Chip Frappuccino. The Espresso Ice Cream that Michelle from Brown Eyed Baker posted a few days ago? That would do nicely.

And don’t be scared off by the ladyfingers. I can usually find them in my grocery’s cookie section or with the frozen foods, but they can be pricey, and …

Come closer. I need to whisper something in your ear.

Sometimes I just use vanilla wafers.

Seriously. Vanilla wafers are cheap, they absorb liquid beautifully, and you can use the remaining cookies for banana pudding or as little delivery systems for peanut butter or Nutella.

Then, you can class it up with a nice dollop of whipped cream and some chocolate shavings. Or trash it up with a nice big pour of Kahlua (aka “Ka-hula,” courtesy of a former co-worker who insisted that was the name of the product). Either way, you get a frozen creamy-crunchy coffee tornado in a cup.

Do I mind that Jeff doesn’t share my Tiramisu Sundae love? Nah. If he did, he might catch me making out with my Keurig.

THAT would be awkward.