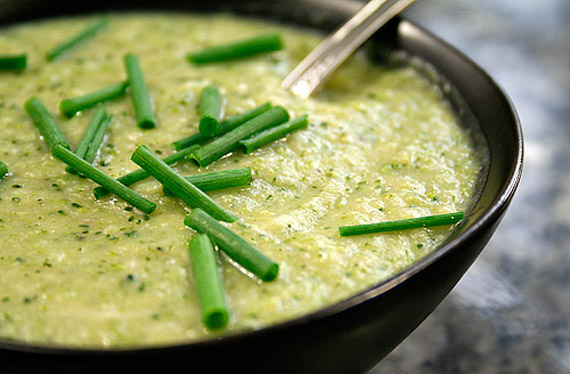 I’m not a huge broccoli fan. I rarely eat it without a.) cheese, b.) dip, or c.) bacon, as The Lord intended. Otherwise, He would not have created it to taste like dirt when it’s raw and smell like terlit water as it cooks.

Can I get an Amen?

And yet, I was curious about this Broccoli Leek Soup. The Roasted Potato Leek Soup I made last fall was so good that I was game to try something similar but actually healthy. I was ready to brave the broccoli.

The problem with most broccoli soups is that they’re thickened with liberal amounts of cheese, cream or canned cream soups, but this one is different. It’s thickened by pureeing the ingredients, especially the potato. You bring the ingredients to a boil, simmer until the broccoli and potato are tender, and then either transfer the soup to a blender or food processor to puree it, or use an immersion blender inside the soup pot.

It’s a thickening trick I’ll keep in mind, since each serving of this soup is only 135 calories.

Victory over stank is part of what separates us from the animals.

So, how does the soup taste?

The original recipe gave me a smooth, thick soup that didn’t have much personality, so I added lemon zest and lemon juice to brighten it up and just enough cayenne to give the soup a little kick. That made it work for me, but don’t be afraid to experiment and create your own variation.

A bowl of this soup with a crusty piece of bread and a slice of good cheese would make a great light meal, but I’ve been pairing a cup with a sandwich or veggie burger for something more substantial.

I still wouldn’t make out with broccoli, but we could hold hands in a dark movie theater. That’s closer than we’ve ever been before.

Adapted from “O, The Oprah Magazine”

*Gluten-Free Tip: Make sure your vegetable broth is gluten-free.