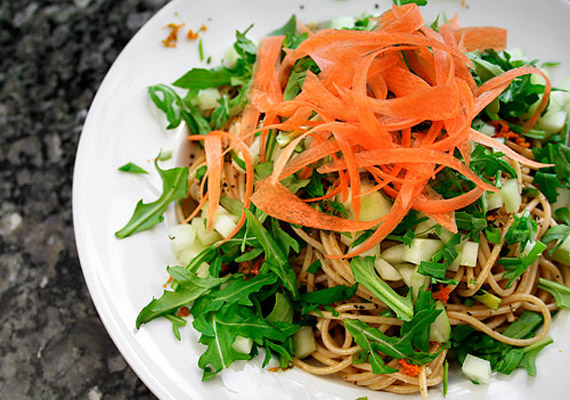 This Asian-inspired tornado of pasta and fresh vegetables is a great alternative for people who would gladly eat a salad if it weren’t for all that lettuce.

You’ve got a base of whole wheat spaghetti (or soba noodles) tossed with sesame oil, which gives you a much lighter sesame taste than adding the oil to the dressing. These noodles are tossed with a homemade peanut-ginger dressing, chives and citrus zest, so they are not lacking in flavor, but then it’s time to go crazy with the vegetables. This time around, I added cucumbers, scallions, arugula and carrot, but you could toss in some snow peas, sugar snaps, red and yellow bell peppers and a mix of baby greens.

For even more crunch, you could top the salad with toasted sesame seeds or chopped peanuts and then shout “BrrrrrZAP!” and get your own show on the Food Network.

You can store the finished salad (minus the baby greens) in the refrigerator for up to four hours before serving, so it’s a great choice for entertaining (or just having dinner done early). And if you’re hosting a not-so-meatless group or husband, you could always add some sliced grilled chicken. Just don’t let anyone catch you drinking shot glasses of the peanut-ginger dressing.

In a medium bowl, whisk together everything but the oil. Slowly add the oil, and whisk until all the oil is incorporated. Use immediately or refrigerate for up to 6 days.