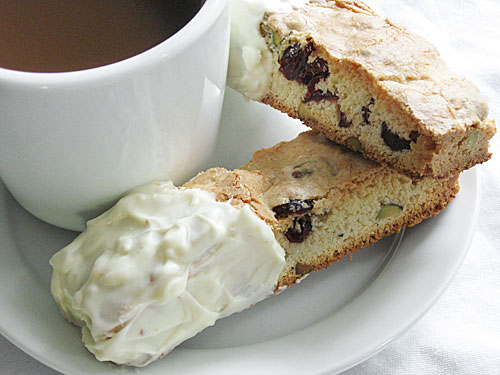 You have no idea how close I was to digging out the Lenox Holiday china for this post. Blame Lowe’s. Last weekend, the gardening section had been overtaken by an army of inflatable tractor-riding Santas with plugs of mistletoe chaw in their cheeks, and after every “Ho! Ho! Ho!,” they’d belch glitter.

Kidding! I love tractors! And Christmas! I just wish we weren’t bombarded with carols and Kris Kringle until after the official start of the holidays: the “Oprah’s Favorite Things” show.

So, how did I end up with Lenox Holiday Biscotti?

I wasn’t much of a biscotti fan. I couldn’t understand why anyone would bake something twice, so that it smelled like a cookie but had the texture of a dog biscuit. It seemed cruel. Then TWD decided to bake Dorie’s Greenspan’s Lenox Almond Biscotti. I liked her suggested substitutions: dried fruits, spices, nuts and citrus zest. So, I substituted the original almonds with pistachios, replaced the almond extract with vanilla and added about one-third of a cup of dried cranberries. The dough was extremely sticky going into the oven, but slicing the baked rectangle was a dream. No breaking or cracking.

After the baked sliced biscotti had cooled, I dipped each piece into melted white chocolate. They looked great, smelled fantastic. And they were delicious! I had all the pride of a caveman who’d just reinvented the wheel. Let me explain …

I was drawing a blank on how to photograph the biscotti, so I decided to look up “biscotti” on the Food Network’s website. That’s when I found out Giada De Laurentiis had used the pistachio-cranberry-white chocolate combination and called her creation Holiday Biscotti. Hence, Lenox Holiday Biscotti.

Instead, I have a really great biscotti recipe. Biscotti that’s crunchy but won’t break your teeth and tastes as good as it smells. Delicious with or without dunking. And, I have something in common with Giada besides my abnormally large head. Great (big) minds think alike.

and Giada De Laurentiis’ Holiday Biscotti (via FoodNetwork.com)
Makes about 30 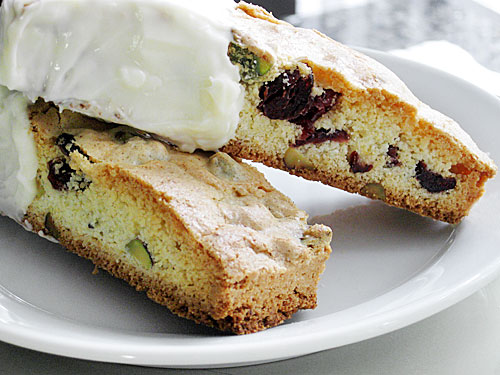 56 thoughts on “Biscotti with Cranberries and Pistachios”