Warning: file_exists(): open_basedir restriction in effect. File(core/post-comments) is not within the allowed path(s): (/nfs:/tmp:/usr/local:/etc/apache2/gs-bin) in /nfs/c10/h14/mnt/148131/domains/ezrapoundcake.com/html/wp-includes/blocks.php on line 532
 Someone's probably writing a song about it right now. - Ezra Pound Cake
Skip to content 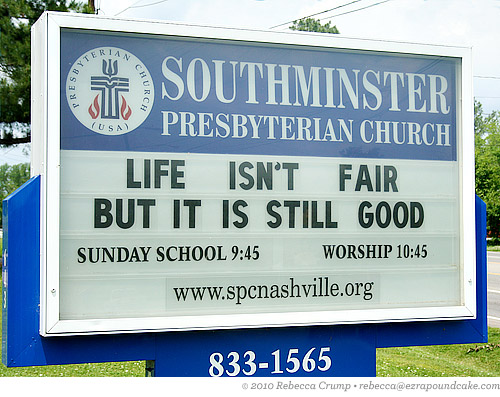 I always wanted to live in Nashville.

Where else can you go to see a band play, and when the bass guitarist is late for the encore and the lead singer asks, “Is there a bass player in the house?,” a dozen people rush forward? And someone not only jumps on stage but counts off the next song and plays it through?

Where else can you picnic next to a full-blown replica of the Greek Parthenon? Or see live music every day of the week? Or strike up a conversation with a woman at the airport who tells you she’s named her baby “Titan,” because that’s how much she loves the home team?

It’s a big city with a small-town heart. A city of neighbors.

Three weeks ago, we were expecting a few thunderstorms. The kind you think might knock out your electricity or cable for a few minutes. Jeff and I were straightening the house, getting things ready for company that night, when the rain started.

At first, everyone was making jokes about Noah’s Ark being rediscovered just in time. Hours later, our eyes were glued to the TV as we saw people being rescued in boats from their homes and cars.

It just happened so fast.

More than 40 counties across Tennessee have been declared disaster areas. People lost their homes, businesses, pets, cars, crops, photo albums. We’ve got about $1.5 billion in damage to Nashville alone.

A few days after the flood, when it was safe to drive, I was sitting at a stop sign and noticed a bride walking down her front steps. My first thought was, “Why on earth didn’t they postpone the wedding?” But then a few friends or family members came rushing out of the bride’s front door and surrounded her, lifting the edges of her wedding gown to keep it from touching the wet grass.

We move forward, because no matter the circumstances, we have each other.

So, I’m asking you to do what you can to help your neighbors in Nashville and across Middle Tennessee. We need you.

P.S. Thank you all so much for the overwhelming number of e-mails asking if we were OK after the flood. We are very grateful not to have suffered any damage to our home. I’ll never complain about push-mowing uphill again.

10 thoughts on “Someone’s probably writing a song about it right now.”