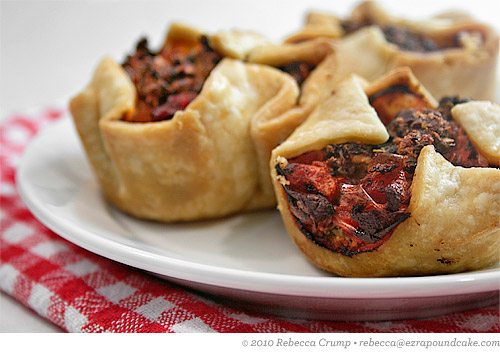 According to my hometown newspaper, a few weeks ago, someone found a box in a parking lot downtown. The writing on the box warned that anyone who touched it would lose their hands. So, the person who found the box called 911, and the Bomb Squad came to investigate its contents.

Just then, the box’s owner showed up. She was a Chicago woman who’d driven down for a family reunion and brought something special with her: a big, messy box of ribs. After the party, she’d left the empty box to dry outside, because it was too big for a trash bin and too funky for her hotel room. And what about that “lose your hands” warning? It was written on the box by a rib joint employee who didn’t want anyone taking them besides this customer.

When it comes to picnics, it pays to take something that won’t get you in trouble with the Bomb Squad.

I didn’t know anything about hand pies until I saw the sausage and fennel version in “Martha Stewart’s Baking Handbook.” The photo shows these lovely golden pockets of pastry with the corners folded up and around the filling. Gorgeous. The sort of heavy, heavy hors d’oeuvres just right for a fall or winter get-together. So, I bookmarked them.

Then, a few days ago, I was flipping through a back issue of “Martha Stewart Living”dedicated to picnic foods, and I saw that she’d featured hand pies again, only this time a meatless version. A vegetarian main course option for picnics and cookouts. A dozen buttery pastry squares filled with roasted tomatoes and onions, black olives, feta and oregano.

I didn’t bookmark them. I made them. Immediately. Post haste. Pronto. And I can testify that if these hand pies had a show on TLC, it’d be called “Little Pies, Big Flava.” They’re impossible to nibble. You can’t make them last with smallish bites. Once you break through the pastry, the filling starts tumbling out in big, glorious mouthfuls. And then the hand pie is gone. And you need another.

The original filling recipe is wonderfully summery and Greek-inspired, but with so much peak produce around, it’d be a shame not to try some variations. Like zucchini, fresh corn and pepper jack. Mushrooms, roasted red peppers and caramelized onions. Zucchini, sun-dried tomatoes and goat cheese. Eggplant and red onion. You could even bake the pies, let them cool, and add a “cold” element, like chopped avocado or crumbled cheese.

Best of all? You can bake and transport the pies in a muffin tin. No mess, no Bomb Squad.