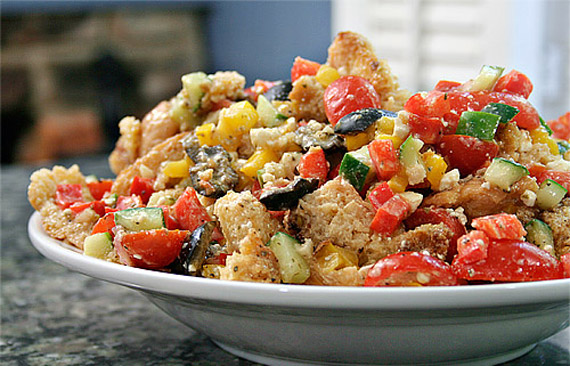 Today, I’m pleased to report that Jeff and I are as comatose as two people can be without actually being hooked up to medical equipment or shooting heroin.

After three days of painting, two road trips, three fireworks shows, a couple of cookouts and a family reunion, we are in deep recovery mode. The shades are drawn. The a/c is cranking. How many episodes of “Band of Brothers” have we seen today? I don’t know, but we’ve been in it to win it since 1100 hours. Since Normandy!

Fighting aside, I didn’t want to let the day slip away without sharing this recipe for Ina Garten’s Greek Panzanella. It’s a serious contender for summer stapledom.

Where most salads are filled out with lettuce or other greens, a panzanella is a bread salad. Most are made with stale bread and ripe summer tomatoes, dressed with a simple vinaigrette and then tossed with a fresh herb or two. The idea is to let the salad sit for at least 30 minutes before you dig in, giving the stale bread time to soak up the vinaigrette and the juice from the tomatoes and transform into soft pillows full of summery goodness.

Ina Garten’s Greek Panzanella is a flavor-packed play on the original. With homemade croutons.

You start by cutting your bread into cubes and toasting them in olive oil to make your motherlode of croutons. Then you grab a big bowl, and fill it with some of the best vegetables of the summer: ripe cherry tomatoes, chopped red and yellow peppers, sliced hothouse cucumber and red onion. Add your Greek touches (e.g. a Greek vinaigrette, cubes of feta cheese and a big handful of Kalamata olives), toss in those croutons, mix everything together, and set the salad aside for 30 minutes.

While you’re waiting, try not to snack on the croutons and feta. Fail miserably. Resolve to try again next time.

The first time I made this salad, six cups of croutons seemed excessive, but you need them to really permeate the salad and bring together all of these big flavors. Thanks to the toasting, they will still have plenty of crunch, even after the 30-minute rest. (Of course, they will get soggy in the salad overnight, so if you think you might have leftovers, store some of the croutons separately instead of mixing them all into the salad.)

This panzanella has plenty of personality, so you could definitely serve it as a quick summer supper or as a side at your next cookout. Just don’t let that next cookout be this afternoon. We’re still fighting in Bastogne.