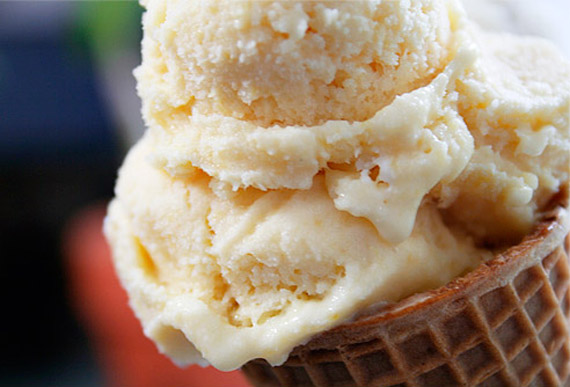 Some dads play golf. Some fish. When my dad needs to relax, he drives. Windows down, radio on. And not just around the block or around town. Once he left the house and drove all the way to New Orleans.

He’d offer to take us out to eat after church, and three hours later, we’d wind up at Lambert’s Café in Sikeston, Missouri, reaching up for those “throwed rolls” like they were manna from heaven.

But one of the benefits of Daddy’s extensive travels was that right as we started threatening to kill ourselves or each other if we didn’t get out of the van, he’d find a dairy dip. Some standing room-only shack that smelled like little burgers and fries and soft-serve ice cream.

Daddy bought a lot of goodwill with that 99-cent cone.

Now, I love making ice cream at home, and this is the one of the best I’ve ever made or eaten: Dorie Greenspan’s Honey-Peach Ice Cream.

Summer in a cone.

Even the smallest bite blooms with the flavor of ripe peaches and cold, sweet cream. It’d be worth a three-hour drive, but it’s so much nicer to just walk to the freezer.