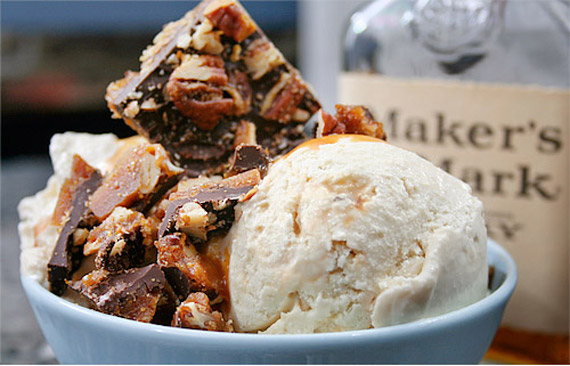 So, what do you get when you take a few scoops of the Lee Brothers’ Bourbon Vanilla Ice Cream, swaddle them in a warm ladleful of John Currence’s very bourbony Salted Bourbon-Caramel Sauce and crown them with David Lebovitz’s Buttercrunch Toffee?

Even though it contains an entire cup of bourbon, the Bourbon Vanilla Ice Cream tastes surprisingly wholesome. You could easily take it to a Sunday School picnic, and no one would be the wiser. They would assume it was just a really good vanilla, and it is.

That’s why, if you really want to taste the bourbon, you need the Salted Bourbon-Caramel Sauce. It’s intense, with a punch of bourbon that will jerk you up out of your seat. One thick, rich spoonful might be more than enough for a lot of people.

So, what about the Buttercrunch Toffee? My copy of David Lebovitz’s “The Perfect Scoop”

arrived while I was making this ice cream, and as soon as I saw the photo of the toffee, it was love. I had already toasted some pecans to sprinkle on the sundae, so I just repurposed them for the toffee. Best. Decision. Ever. I don’t think I’ve ever made anything from a new cookbook that quickly.

If you’d like, you can stir the toffee into your ice cream before tucking it into the freezer, but I kept it in a separate container, so the toffee would be room-temperature. And so Jeff wouldn’t divorce me. He was busy snacking on the toffee while I was waiting for the ice cream.

Note to self: Double batches.

1. Pour the bourbon into a saucepan, and bring it to a boil over medium-high heat. Add the sugar and salt. Stir until the sugar dissolves, about 2 minutes. Reduce heat to medium, and continue to boil until liquid is reduced by one fourth, about 6 minutes.

2. Add vanilla and cream, and heat over medium heat until a candy thermometer reads 150 degrees F, 2 to 3 minutes.

3. In a large bowl, beat the egg yolks, and pour the bourbon cream into the eggs in a thin stream, whisking until the liquids are combined. Return the mixture to the pan, and heat over medium heat, stirring, until the candy thermometer reaches 175 degrees F, 3 to 4 minutes. Add milk. Transfer the ice cream base to a container with a lid, and refrigerate for 4 hours or overnight.

4. Pour the chilled bourbon custard into an ice cream maker, and churn according to the manufacturer’s instructions. Transfer the ice cream to a container with a tight-fitting lid, and cover the surface of the ice cream with plastic wrap. Put the lid on the container, and freeze until the ice cream has hardened, at least 2 hours. (It will keep for up to 1 month.)

5. Remove the ice cream from the freezer 10 minutes before serving.

1. In a small saucepan, combine the sugar, water and corn syrup. Bring to a low boil.

2. Gently swirl the mixture in a circular motion (do not stir), and allow it to boil down until it is a deep amber color, at least 10 minutes.

4. Stir in salt and bourbon, and whisk again. Remove from heat and allow to cool before using.