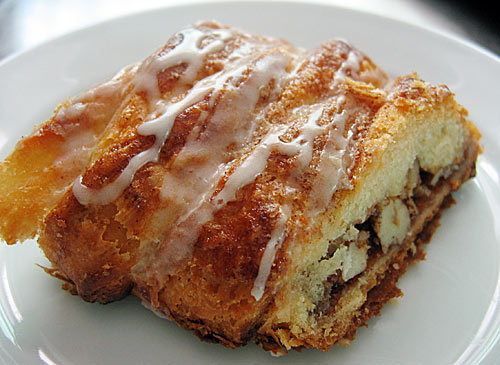 This morning, I made two Danish Braids, because we don’t have enough carbs in the house. What with the cake, the biscuits, the scones. If not for Simply Orange, we’d have scurvy.

There are three things you should know if you decide to make this Danish Braid:

1. The entire process takes at least eight hours. The dough rests in the fridge for five. So, you’ll need to set aside an afternoon or evening to prep the dough. The process isn’t all that intense, but you’ll be rolling and folding the dough four times, with 30-minute breaks in between. Plenty of time to catch up on the laundry, take a multivitamin, or watch way too much Law and Order. Guess which one I did.

2. If you’ve neither seen nor eaten a Danish braid before, it’s basically a glorified Hot Pocket® with buttery, flaky layers. You can fill it with roughly a cup of anything you like: ham and cheese, apples and almonds, Nutella and hazelnuts, spinach and feta, cherries and cream cheese. The dough recipe you’ll find at the end of this post makes two Danish braids. My first was cinnamon, sugar, and toasted pecans. The second was pepperoni, ricotta, mozzarella, Parmesan, and basil. If you decide to make a savory braid, use the given dough recipe, but leave out the orange zest, cardamom, vanilla, and orange juice.

3. The braiding is no big deal. A Danish braid is a laminated dough. Instead of combining the butter and a flour mixture, you keep them separate and fold the butter between the layers of dough. Your first one or two turns of the dough might look pretty ragged; just keep going. With every turn, the dough will get smoother. And, if you can lace your shoes, you can braid this dough.

Adapted from Sherry Yard’s “The Secrets of Baking”

For the Butter Block: 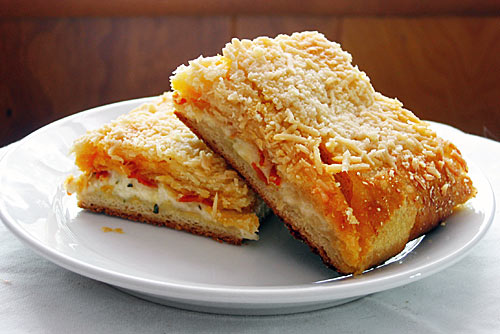