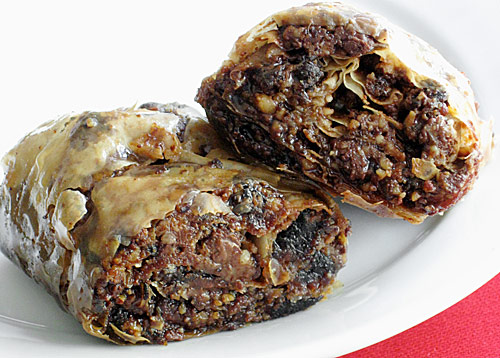 She’s gotten to me. Martha and her 1,000 Days of Halloween. First, with the severed finger invitations. Then the paper mice and the jack-o’-lanterns and the wreath covered in glittery bats. Yes, she wore me down, like water over a rock. But I don’t own a glue gun, and if I served a petit four ghost or cider with a bobbing apple head to Jeff, he’d have me committed. So, I started looking for a more adult Halloween treat.

Because people who survive puberty deserve something better than a pack of Skittles®. More refined than anything with a face drawn on it. They deserve Orange Chocolate Baklava.

Imagine your favorite baklava components – phyllo dough, nuts and honey – combined with bittersweet chocolate and infused with orange syrup. So. Much. Flavor. The syrup soaks into the baklava as it cools, so before you take that first bite, tuck a napkin or a plate under your chin. Sticky-sweet. Crunchy. Chewy. Chocolatey. And it lasts FIVE DAYS. Or so I’m told.

Adapted from John Scharffenger and Robert Steinberg’s “Essence of Chocolate”