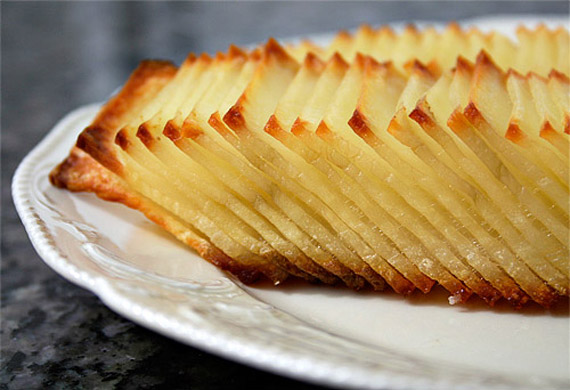 Have you seen the episode of “No Reservations” where Anthony Bourdain goes to Uruguay? It’s the one where he gorges on grilled meat – steak, sausages, loins, armadillo – and then meets up with Francis Mallmann, the author of “Seven Fires,”

Not long after we saw that episode, Jeff picked up a copy of “Seven Fires,”

and I assumed I should be girding my loins for a total meat-fest of suckling this and chimichurried that. But then he opened the book and spun it around to show me the recipe he was obsessed with making: Potato Dominoes. Baking potatoes that are trimmed into potato bricks, sliced thinly, brushed with clarified butter and baked at an angle, so they look like rows of fallen dominoes.

I thought the domino arrangement was just for show, but I stand corrected. Since you don’t rinse the potatoes or place them in water after you slice them, the starch glues the potato slices together and allows each one to have a crisp top half, a soft bottom half and crisp brown edges. Mercy. Making these isn’t easy as throwing a potato into the oven, but once you start peeling away slice after buttery slow-roasted slice, you’ll be able to taste the extra effort. If the potatoes are this good, it makes me wonder about that armadillo.

For entertaining, you can cook the potatoes halfway through (20 minutes), and set aside at room temperature. Then return them to the oven for 20 to 30 minutes before serving

Note: Once cool, the clarified butter can be refrigerated for weeks.