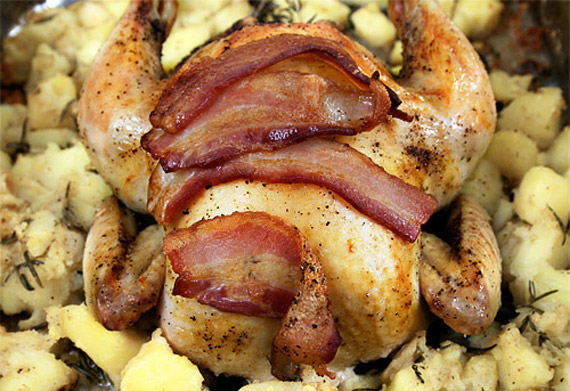 Jeff has a standing order for roast chicken once a week, year-round.

So I’ve roasted many, many chickens and tried every recipe under the sun – “perfect” chicken, orange chicken, slashed chicken, herbed chicken, lemon chicken, trussed and untrussed, with vegetables and without – but the first time we tasted Jamie Oliver’s Roast Chicken with Lemon and Bacon-Rosemary Potatoes, I knew I’d found The One. (Cue choir of angels.)

This chicken has a crisp skin on the outside, but it’s lemony and juicy on the inside. And those potatoes? You could make a meal off the potatoes. They’re so full of flavor. First, they’re par-boiled with garlic and lemon, then roasted with the chicken and rosemary, and finally tossed with crumbled bacon – the same bacon that cooks on top of the chicken during the last 45 minutes of roasting.

Sweet goodness. This is a MEAL.

Delicious and so incredibly satisfying.

Make it for someone you love. Then get ready to make it again.

19 thoughts on “Roast Chicken with Lemon and Bacon-Rosemary Potatoes”