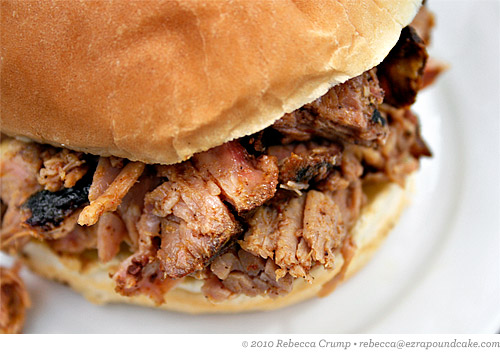 For some people, it’s lunch. But for others, it’s a lifelong romance. An art form. An obsession. A religion.

There’s just something about sinking your teeth into a piece of meat that’s been cooked low and slow for the better part of a day and maybe even through the night. It’s meat that’s been tended until it’s ready to fall off the bone. Sweet. Smoky. And don’t even get me started on the bark, the dark crust that forms around the meat. Bark owns me.

So, when Carey Bringle asked if we’d like to try out his Smoke Like A Pro™ kit and make some barbecue at home, we were psyched. Carey’s the award-winning pitmaster of the Peg Leg Porkers competition barbecue team. His Memphis Wet Sauce was named one of Bon Appetit’s top five championship barbecue sauces. He’s been making barbecue for more than 30 years.

But could he teach us? With a kit?

I had my doubts until I opened the box.

The Smoke Like A Pro™ kit comes with everything you need – a bottle of the Memphis Wet Sauce, a container of Peg Leg Porker Dry Rub, thermometers, wood chips, a syringe and brine mixture, gloves. Everything but the meat and the heat, which can come from your charcoal, gas or electric grill.

But the most valuable part of the kit is Carey’s set of step-by-step instructions. He guides you through each part of the process in a really conversational tone, and there’s a photo with almost every step.

Hallelujah! We were ready.

Jeff and I decided to try out the kit over Labor Day weekend. He woke up early to soak the wood chips and knock the chill off of our Boston butt. I made breakfast, and then we really got going – mixing the brine, injecting it into the meat, applying the dry rub and getting the grill ready.

We knew the meat would be cooking low and slow – it takes 12 to 15 hours to smoke a Boston butt – so we moved a table and chairs into the yard near the smoker, broke out the cold beverages and made a day of it. Since you’ve got to tend the fire every 30 minutes or so, it helps to have good music and good company. We had a lot of fun, but we kept thinking of people we wished we’d invited to hang out and join in.

The toughest part of the process was letting the meat rest for an hour after it came off the grill. I actually found myself wagging my finger at Jeff like an old school marm. Or maybe Mick Jagger.

Finally, finally, finally, I put on the gloves and tore into that thing. And the meat really did fall clean off the bone. As I pulled the pork apart, Jeff picked up a piece, took a bite and fed me the rest.

We just looked at each other. And smiled.

The pork was so tender, sweet and smoky. And we MADE it.

You guys have to try this.

Carey sells the kits online through his sites, Peg Leg Porker and Smoke Like A Pro, but we’re happy to announce that he’s given us a Smoke Like A Pro™ kit to pass along to one of you! 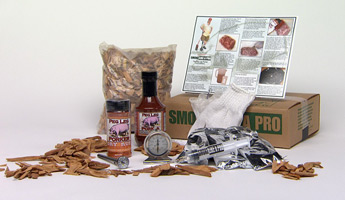 To enter the contest, stop by the Ezra Pound Cake Facebook page, look for the link to this post, and tell me the name of your favorite barbecue joint in the comments.

One entry per person. This contest is open only to friends in the U.S. and Canada.

Good luck! And thanks, Carey!