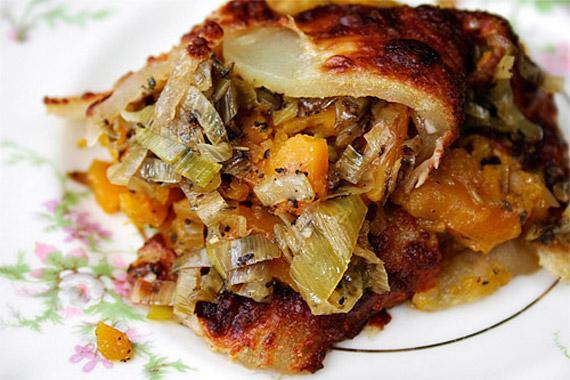 I love it when a recipe that sounds like nothing turns out to really be something.

It’s so simple that when I slid the gratin into the oven, I was a little afraid that the end result would be a hot mess, mushy and bland. But once the heat of the oven started working its magic, the scent of the baking gratin made the entire house smell like Thanksgiving dinner.

I spooned some onto my plate and took the first bite. The slices of apple and squash were tender, not mushy, and their sweetness was perfectly balanced by the sherried leeks and blistered Parmesan.

Pure magic. You start with layers of simple ingredients and end up with something as homey, satisfying and delicious as anything smothered, covered or creamed.